Bruce and Reshma Elder, from the outside, seem like your average, down-to-earth parents. Bruce has worked extensively within the Workplace Health & Safety industry, while Reshma continues to work for their private family business. With five kids on the side as well, Bruce and Reshma understand completely the meaning behind “keeping busy”.

But this family of seven from Brisbane North, Everton Park, are not quite as “typical” a family as some may think, knowing better than most what it’s like to have a sick child.

They have had two.

“Our eldest daughter Davina contracted her cancer diagnosis in 2001. She went through treatment, which appeared quite successful, but when she was released about 6 months later, our eldest son Andrew contracted clear cell meningioma,” Bruce explains. “We spent 6 months in hospital then with Andrew, before Davina relapsed. She went through another round of treatment, where [the doctors] used a testing medicine. She was eventually diagnosed as being clear, and has been so ever since.”

Unfortunately, Andrew’s situation has not been as easy. “Andrew has had his cancer grow back, and the tumours have multiplied.”

When asked how they have coped with having two children diagnosed with cancer, the Elders admit that at times the stress of it all has been overwhelming.

“We understand where we’re at,” says Bruce. “The hardest thing is keeping together through the hard times that you don’t have control of. There are a great deal of pressures – financial and social pressures. You also find yourselves losing time, for yourself and for the other family members, you definitely feel the loss of time with the other siblings. That becomes a very hard thing to cope with at time. The one thing that keeps us together is that light at the end of the tunnel. You just have to keep going”.

Reshma believes the key to getting through these rough patches is communication. “It can be tiring, you know? Often we pinch ourselves and question how the hell we do it, but we just have to think and live like elastic”. 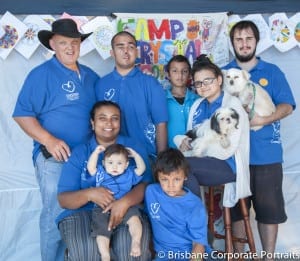 She agrees that the life they have had little choice in leading has certainly changed their idea of what is normal. “We’re a bit of a weird family, but we’re a strong family. We don’t have things happen “normally” around here, as such, like some other families do, but we’ve learnt that that’s okay. We just have to keep going and do what’s right for ours”.

When asked what advice the pair might have for other families going through similar situations, the Elders have plenty of experience and words of wisdom to share.

“We plan for long term events, but we also make sure that we live day to day and enjoy each day,” Bruce tells us. “6 months ago we received the devastating news that things haven’t gone well for Andrew, and that he’s palliative, and even though he’s got benign tumours… We can’t just sit on the negative. We have to focus on the positive. And you know what? If an opportunity comes up, for entertainment or something different to do, we just do it. We take off work and we just go, and we live for what we have. We never miss a particular opportunity, even though we’re busy people.”

When asked about how the couple originally got involved with Childhood Cancer Support, they say it was something they ‘fell into’.

“We had a friend of ours who had mentioned Camp Crystal, who got me involved,” Bruce explains. “I ended up sitting in on a working bee, and then we came one year to Camp. Bill Thompson (CCS President) eventually ended up talking me into getting on the Board, and we’ve been involved ever since. We’ve attended Camp for about 8 years now”.

Bruce says that it’s also having places like Childhood Cancer Support that make life so much easier. “There is nothing clinical about CCS. It’s an organic beast, and one of the better controlled not-for-profit organisations that I’ve been involved in. I’ll help out with anything at Camp and at other events they hold, from cleaning a toilet to cutting a steak, and hopefully washing my hands in between”.

Andrew Elder went through his ninth operation on the 29th July, 2015; a procedure that presented an 80% risk to his life. So far, Andrew’s condition is stable.

Childhood Cancer Support is regularly humbled by the stories and experiences so many families like the Elders have to tell. What is even more so, is when these families offer to share them with us.

Special thank you to the Elder family for giving their time to speak with Childhood Cancer Support.