Cook family encourages residents to Talk Like a Pirate

Cook family encourages residents to Talk Like a Pirate 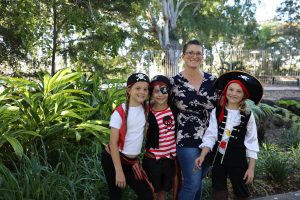 The Cook family is encouraging the community to support Talk Like a Pirate Day this year, after experiencing firsthand the effects childhood cancer has on a family.

Talk Like a Pirate Day raises funds for Childhood Cancer Support, an organisation that the Cook family knows all too well.

Rhiannon Cook said her daughter India was diagnosed with a rare liver cancer at just seven years old, prompting the family to contact the organisation.

“We started investigating precocious puberty in my daughter when she was seven years old and after a few investigations we found out that she had liver cancer,” Rhiannon said.

“It is very rare for a child to get it, so it is a slight variant.

“We got in contact with Childhood Cancer Support and they put us up in accommodation in Brisbane which was absolutely phenomenal.”

The services provided to the family by Childhood Cancer Support helped them to get through trips to Brisbane and supported the family in many different ways.

“We had our own self contained unit and we had our own social worker who was there to give us a hand and there were beautiful food donations bought in as well,” she said.

“You lived in your own little community with people who are going through very similar circumstances, all with different childhood cancers,” she said. 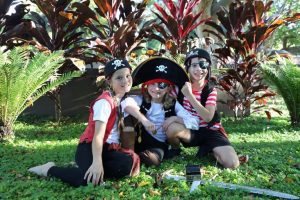 Fortunately, the family have come through the other side of the treatment and India is recovering well.

“India is fantastic now; she has been to her twelve month scans and thankfully nothing has come back,” she said.

“In saying that, we aren’t out of the clear for another three or four years but we have only four trips to Brisbane rather than every other month.”

The family remain in close contact with the team at Bundaberg Hospital, who are this year hosting a fundraiser of their own on Talk Like a Pirate Day.

“The Bundaberg Hospital has been amazing, we get regular contact from Kobi as she rings to check on you,” she said.

“When we would go in the team were always really supportive and understanding that these experiences are really traumatic for a child.”

Rhiannon encourages the local community to support Talk Like a Pirate Day, as it is a great way to raise awareness of childhood cancer and raise much needed funds for Childhood Cancer Support to continue its great work.

“Talk Like a Pirate Day raises much needed awareness for childhood cancer and raises funds for Childhood Cancer Support and if we can be ambassadors for that, it is great.

“Everyone should get involved, it is very easy and kids look amazing.”

Talk Like a Pirate Day is held on September 15, with the Bundaberg Hospital this year hosting a fundraiser of their own. 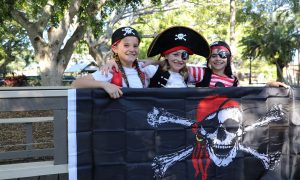 The Bundaberg Hospital paediatric department is raising funds for Talk Like a Pirate Day, supporting families that come through the hospital affected by childhood cancer.

The hospital’s paediatric department see firsthand the positive support the Childhood Cancer Support organisation is providing to local families, urging them to get together and raise funds for Talk Like a Pirate Day.

Bundaberg Hospital Paediatric Nurse Amy Slapp said the fundraiser was important to the team as they understood the support required for families who are going through childhood cancer diagnosis and treatments.

“This is important to us on the ward as we have patients going through cancer treatment which is difficult enough without having the added pressures of finances or the child being separated from their family during treatment,” Amy said.

“This organisation helps keep families together in a stressful time when they need each other.”

Amy said the hospital was looking forward to hosting a range of activities on the day to raise funds and were currently on the look out for any donations that could be used for raffles.

“We are running the fundraiser on Wednesday 15 September which will consist of a continuous raffle, a money board and hopefully a barbecue,” she said.

“We would be happy with anything we could put towards our raffle or if we end up with bigger donations we could hold a silent auction.”

Anyone can donate directly to the Bundaberg Paeds fundraiser page ahead of the day or for those who can’t be there on the day can do so here.